The board is a custom design from LCSI based on the TI TMS9918A video display processor, a video chip used in several personal computers contemporary with the Apple II.  Most of the board area consists of the standard TMS9918A chip and support circuits, including 16 KB of video memory (U1 – U8), the video clock, and the composite out.

A short pigtail brings the composite video connection to the outside of the computer case.  The sprite card does not display normal Apple II video, and the user must switch the cable between the sprite card and normal video output when switching between software designed for the card and other software.  There’s a separate ground lead from the composite connector to the power supply.  I’ve never seen a similar separate ground lead on any other peripheral card.  Perhaps LCSI had trouble passing the FCC tests and added this ground as the least expensive fix.

This card includes a 2 KB EPROM.  A ROM (or EPROM) allows reliable software detection of the card.  However, 2 KB is too large for this function alone.  Since the 64 KB main memory of the Apple II is limiting for Logo, I expect the designers used the extra space for Logo-related code or data.  I’ll examine the contents in a later post.  There’s a second unpopulated (U14) ROM footprint.  Perhaps LCSI considered using lower density EPROMs or more EPROM.

The decoupling capacitors (C1 – C10) are too large for the PCB footprints.  Notice how the leads are bent at odd angles to make the available parts fit.

There are two unplated holes (one near C13 and another near U1) in the PCB.  I have no idea why these exists.  Perhaps they’re mounting holes used during manufacturing, or perhaps they’re harmless errors in the board design.

I look forward to seeing the card “in action.” 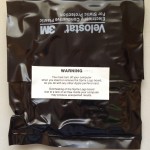 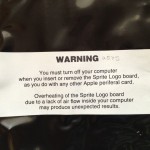 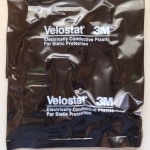 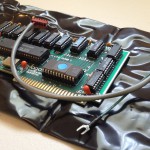 The sprite card with composite pigtail 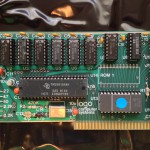 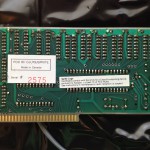 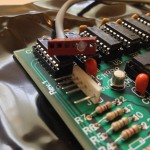 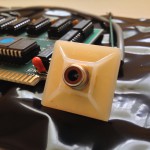